7 years after man disappears, his submerged van is found 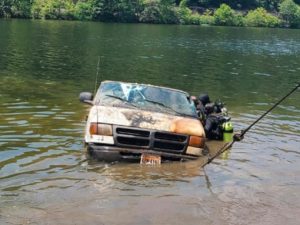 NEWS RELEASE: On June 18th, 2013 Thomas W. Sprinkle Jr. was reported missing to the Amherst County Sheriff’s Office. At the time Mr. Sprinkle went missing, he was driving a white 2001 Dodge Van. On 7/21/2020, The Virginia State Police dive team was assisting in the recovery of a vehicle that was accidentally lost on the boat ramp at Monocan Park when they found a white van on the river bottom. The van recovered on 7/21/2020 has been positively identified as the van belonging to Mr. Sprinkle. The investigations division is working to excavate the interior of the van and have found suspected human remains which have been transported to the medical examiner’s office.This will remain an active investigation until the suspected remains are positively identified, but at this time no foul play is suspected.