Local swift-water rescue teams members return from Texas, say some of the worst devastation has not been reported 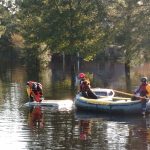 Swift-water rescue team members from our area say what you have seen on TV from Texas doesn’t begin to show the degree of devastation left by Hurricane Harvey, especially in smaller communities away from Houston. Personnel from several area fire departments are back from a week in Texas, as WFIR’s Evan Jones reports.