An exhibit now showing in Roanoke shows how advertisers responded to the flu pandemic of 1918 that killed millions worldwide. Virginia Tech Professor Tom Ewing has been studying the news accounts and advertisements during the “Spanish Flu” outbreak, focusing on Roanoke newspapers. He says some of the ads played on alarmist fears, but others sought to portray products as ways to avoid getting the deadly flu — like heavy nightwear to permit open windows even on cold nights. The exhibit is at the Science Museum of Western Virginia and runs through January. Virginia Tech Professor Tom Ewing assembled the exhibit:

Click here for an on-line gallery of the 1918 flu-related advertisements. 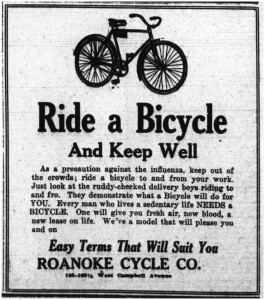 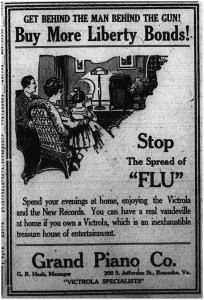