UPDATE: Bank robbery suspect ID’d but not yet captured 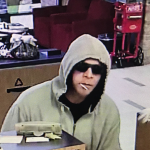 UPDATE: Blacksburg Police have identified the man who they say held up a bank yesterday, but at last word, they had not yet found him. Police say 35-year-old Edward Tolley of Blacksburg should be considered armed and dangerous. He allegedly walked into the First Community Bank, demanded money and got it. No word on how much was taken.

PREVIOUS: Blacksburg Police are asking for help identifying a man they believe is responsible for robbing a bank on South Main Street. The suspect allegedly held-up First Community Bank yesterday afternoon. Police say no weapon was displayed and he left the bank with an undisclosed amount of cash. The image shows what appears to be a white man wearing a gray hoodie and sunglasses. You can see the photo on our web and social media sites.

News release 10/25/2018:  The Blacksburg Police Department is asking for help to identify the below-pictured subject as part of an ongoing investigation. The subject is described as a white male, wearing a gray hoodie and sunglasses at the time of the incident.  Anyone who may be able to identify the subject is asked to contact the Blacksburg Police Department at 540-443-1400 or anonymously at 540-443-1423 or by email at CIU@blacksburg.gov.  No further details will be provided at this time.