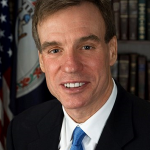 U.S. Sen. Mark R. Warner (D-VA), Vice Chairman of the Senate Select Committee on Intelligence, released the following statement after George Papadopoulos, a former Trump campaign adviser, was sentenced for lying to the FBI about his interactions with suspected Russian intermediaries during the 2016 presidential campaign:  “Despite constant attacks by the President and his allies, Special Counsel Robert Mueller and his team have once again demonstrated that they are conducting a serious, professional investigation into the Trump campaign’s contacts with Russians during the 2016 election.

“As an influential foreign policy adviser to the Trump campaign, Mr. Papadopoulos was informed that Russia had ‘dirt’ on Hillary Clinton in the form of ‘thousands of emails’ at a critical time during the campaign. He also had access to, and communications with, the campaign’s top leaders. That’s not conjecture – that is according to Mr. Papadopoulos himself. “I still have significant questions about how high that information went, and I know the Senate Intelligence Committee would like to hear directly from Mr. Papadopoulos.”