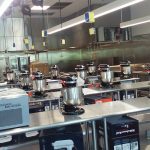 The expanded Virginia Western culinary arts program building on Henry Street is getting ready for the new semester starting August 20th. Its tripled the footprint and now features several state of the art working “labs” for culinary students. James Zeisler runs the program and says the expansion has been needed for a decade. “Chef Z” also says a ribbon cutting is planned for September 12th, with several other opening celebrations in the works as well.