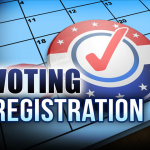 Virginia’s voter registration deadline has been extended until tomorrow, October 15th at midnight. That’s according to Governor Northam’s official Twitter account. This comes after a severed fiber optic cable shut down Virginia’s online voter registration system yesterday, which was the last day to register before the November general election.

Meanwhile, the Republican Party of Virginia has weighed in on a judge’s decision to extend the state’s online voter registration system until tomorrow midnight, after it went down yesterday when a fiber optic trunk line was cut by contractors: saying the Federal Court judge did the right thing – also adding that voters should not be penalized for “the latest of the Northam administration’s failures in election administration.” The RPV also suggests calling “Miss Utility at 811 before you dig.”