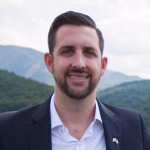 A onetime Democratic candidate for Congress has declared his intention to seek the party’s nomination for a seat on Roanoke City Council. More from WFIR’s Gene Marrano: