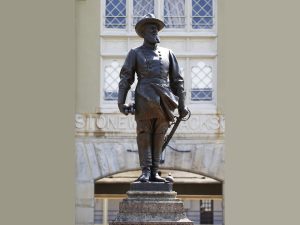 During its meeting today the Virginia Military Institute Board of Visitors voted unanimously to remove the statue of Confederate Lt. Gen. Thomas “Stonewall” Jackson from its central location on post. That’s according to several media reports. A new location was not announced, but both putting it in storage or moving the statue to the New Market battlefield were mentioned. The president of the board, John Boland, said it has been the “general consensus” that moving the statue is the right decision.