Virginians buckling up more on the road 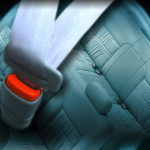 RICHMOND, Va. (AP) – Virginians are using their seat belts more than ever before.  The Virginian-Pilot reports a record 85 percent of Virginians are using their seat belts, up from 79 percent in recent years. The figures come from Old Dominion University researchers collecting data through roadside surveys done at random locations in Virginia. State officials say they are still trying to increase compliance. In 2017 so far, 236 people have died in crashes because they weren’t wearing seat belts.