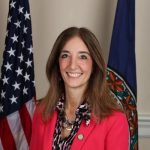 RICHMOND, Va. (AP) — Virginia House Democrats have picked Del. Eileen Filler-Corn to be their new leader, a move that could help pave the way for her to become the state’s first female House speaker. House Democrats announced Saturday they had elected Filler-Corn to replace House Minority Leader David Toscano. He had recently announced plans to step down from a leadership position. Roanoke Delegate Sam Rasoul was among others who had expressed an interest in the position.

Democrats need to win two seats next year to claim a majority. The party has done well in recent Virginia elections thanks to voter antipathy toward President Donald Trump. An ongoing legal battle could also produce a Democrat-friendly legislative map for next year’s elections.

Filler-Corn is a director of government relations at a lobbying and consulting firm and lives in Northern Virginia.