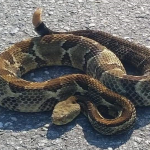 WFIR’s very own Randy Leftwich finds himself the creator of a video today that has instantly become viral world-wide. Leftwich is the producer and sidekick on Greg Roberts Live. He happened to be at Franklin and Wonju this morning when two Roanoke officers helped a rattlesnake safely cross the intersection before animal control officers removed it. Within a few hours of its being posted, NBC and CBS network news had contacted him for permission to use it, as has a worldwide licensing company. WFIR’s Evan Jones has more: