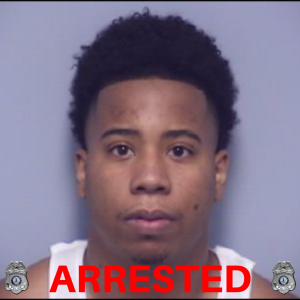 UPDATE: Roanoke Police have identified the victim of this incident as Tyiray L. Anderson, 33 of Roanoke.

The suspect involved in this incident was identified by Roanoke Police as Eric D. Swain, Jr, 21 of Roanoke. A warrant for second degree murder was obtained the night that the incident occurred and RPD personnel began searching for Mr. Swain.

Mr. Swain was located by law enforcement agencies in Greensboro, NC and taken into custody on unrelated charges from an incident that occurred in that jurisdiction. Mr. Swain is currently in custody in North Carolina and is no longer an active threat to our community.

This remains an active investigation and no further updates are available at this time.

Previous: On January 23, 2022 at approximately 7:15 p.m., the City of Roanoke E-911 Center notified Roanoke Police of a person with a gunshot wound inside of a business in the 500 block of 8th Street NW. Responding officers located an adult male with critical injuries. Roanoke Fire-EMS personnel pronounced the man deceased on scene. His identity will be released after next-of-kin is properly notified. No suspects were located immediately after the incident occurred.

While officers were on scene, a vehicle parked approximately a block away from the scene and began shooting in the direction of officers. The vehicle then drove a short distance and fired again in officers’ direction. No officers were injured during this incident. The suspect vehicle fled the area and was not immediately located.

Later that night at approximately 9:00 p.m., Roanoke Police were notified of a person with a gunshot wound in the 2900 block of Hershberger Road NW. Responding officers located an adult female inside of a business in the area with what appeared to be a non-life threatening injury. Roanoke Fire-EMS transported the woman to Carilion Roanoke Memorial Hospital for treatment.
Preliminary investigation indicates that the male subject approached the female victim while she was outside of the business, shot at her, stole her personal items, and fled the scene. Officers did not locate the man immediately after this incident occurred.

Through the course of the investigation, Roanoke Officers and Detectives determined that the suspect was the offender in both of the above incidents. A warrant was obtained and officers began working to locate the suspect.

Early this morning, Roanoke Police were notified by the Greensboro Police Department in North Carolina that the suspect involved in the incidents above was in custody on charges regarding an incident that occurred in their jurisdiction. This incident is unrelated to both of the Roanoke investigations and occurred after the offenses referenced in this release. The suspect’s identity and charges will be shared when the warrants are served.

We commend the Roanoke Police Officers and Detectives for their swift work in identifying the suspect under particularly difficult, dangerous circumstances.