UVA dominates Clemson; could vault to top of ACC 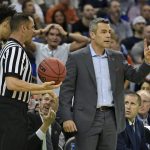 CLEMSON, S.C. (AP) — Virginia coach Tony Bennett thinks that his team has more to improve this season. But he believes his team’s rout of No. 12 Clemson is a strong stride forward in that journey.

“It’s one game,” Bennett cautioned after the 18th-ranked Cavaliers won their 11th straight over the Tigers, 85-50 on Saturday night. “But we’re taking steps in the right direction.” And those steps could lead the Cavaliers (9-2, 5-0 Atlantic Coast Conference) back to the top of the ACC.

Virginia used accurate shooting and a stingy defense to open a double-digit lead and won by its biggest margin in ACC play since topping Wake Forest 70-34 in February 2015.

There were plenty of questions for the 2019 national champions after a humbling 98-75 loss to No. 1 Gonzaga last month. Ever since, Virginia has played like the regular-season ACC champions it was in 2018 and 2019. Sam Hauser and Tomas Woldetensae had 14 points and four 3-pointers each to lead the Cavaliers, who are off to their best league start since opening 12-0 in the 2017-18 season.

“I think we’ve grown” since the Gonzaga loss, said Hauser, the Marquette graduate transfer. “We’ve taken some really good strides since that game. It’s been showing.” That was evident against Clemson (9-2, 3-2 ACC), which entered as the league’s best in fewest points allowed per game. Instead, Virginia took control from the start with their accurate shooting and their own defensive grit.