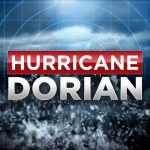 NORFOLK, Va. (AP) _ The U.S. Navy has ordered ships based on Virginia’s coast to head out to sea to avoid Hurricane Dorian. Navy spokeswoman Elizabeth Baker said by phone Wednesday that vessels docked at the world’s largest Navy base in Norfolk and other nearby installations are getting under way. Vice Admiral Andrew Lewis said in a statement Tuesday that the ships will remain at sea until the threat from the storm subsides. Navy aircraft will either be secured in hangars or fly to more inland airfields.

The Navy’s order follows a similar one made by the U.S Air Force earlier Tuesday. F-22 Raptor fighter jets and T-38 Talon training planes were ordered to leave Langley Air Force Base in Hampton, Virginia. They’re going to the Rickenbacker Air National Guard Base outside Columbus, Ohio.