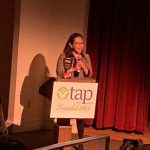 At this morning’s event to formally kickoff the “Bringing Hope Home” fundraising campaign TAP – Total Action for Progress – also handed out its annual Cabell Brand Hope Award, named for the late founder of the social service agency. TAP set the goal for Bringing Hope Home at $300,000 by next June; thanks to corporate sponsors more than one-third of that total has already been raised and can be used for discretionary spending. United Way of Roanoke Valley President and CEO Abby Hamilton was honored with the Hope award, saying afterwards fighting poverty really does take a village: