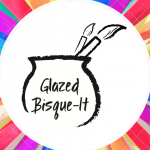 A unique business that started out in downtown Roanoke and retains a loyal following despite two relocations is celebrating its 20th anniversary this month. At Glazed Bisque-it, patrons select and then paint a piece of pottery. They pick it up a week later after it’s been cured in a high-temperature oven – or “kiln.” Pam Golden bought the business ten years ago.  Glazed Bisque-it is now located on Starkey Road after relocating from Promenade Park near Colonial Avenue; Golden has also opened a second location at Smith Mountain Lake.