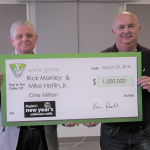 From the Virginia Lottery: It was a few days after the winning numbers were announced in Virginia’s New Year’s Millionaire Raffle, and Rick Manley was at the Speedy Mart at 514-B Blue Ridge Avenue in Bedford. He spotted a sign in the store proclaiming that one of the $1 million top prize tickets had been bought there. So he offered his congratulations to the store owner. “He said, ‘Was it you?’” Mr. Manley recalled. “I said, ‘I doubt it.’” However, he was wrong. When Mr. Manley went and checked the winning numbers, he discovered he did indeed have that winning ticket.

He bought the ticket with his friend Mike Heflin, Jr. The two split the million-dollar prize equally. In addition, the store received a $10,000 bonus from the Virginia Lottery for selling the winning ticket. That winning ticket was #078410. It was one of three top prize winners in the January 1 drawing. The other two top prize winning tickets were bought in Stafford and Virginia Beach. Five additional tickets won $100,000 each. Those tickets were bought in Charlottesville, Leesburg, Ridgeway, South Hill and Virginia Beach. An additional 500 tickets each won $500.