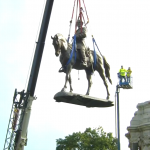 (AP) Virginia’s Supreme Court won’t reconsider its decision to allow removing a statue of Confederate General Robert E. Lee that was cut into pieces and hauled away from Richmond’s Monument Avenue weeks ago. Today the court denied a motion for a rehearing. Four property owners who failed to block the removal filed the motion last month, alleging the justices made “several fundamental errors” in their September 2nd decision.
(from AG Mark Herring’s office) The Supreme Court of Virginia has issued its mandate in the Lee Statue case, denied rehearing, and denied “the motion for clarification and all relief requested therein” that had been filed by the people who fought to block the removal of the statue. This means that the plaintiffs’ last ditch effort has failed and this case has reached the end of the line.
Attorney General Herring is proud of his work in this historic case, which resulted in the Lee statue being removed more than a month ago, following a unanimous decision from SCOVA that dissolved the injunction keeping the statue up. He believes it is time for the Commonwealth to move away from a past when leaders of a racist insurrection were glorified to a future that tells our whole history fully and truthfully.