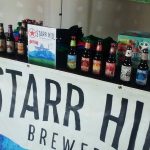 A Charlottesville area craft brewery will open a tasting room and pilot brewery this year in Roanoke, one that will serve in part as a testing room for its new beers. Starr Hill is one of Virginia’s original craft brewers. The Starr Hill pilot brewery will open its Roanoke location at The Bridges, which is near the Virginia Tech-Carilion medical complex along Jefferson Street. The opening is scheduled for September. Robbie O’Cain is the brewmaster: