From the Franklin County Sheriff’s Office: During the course of an investigation being conducted by the Franklin County Sheriff’s Offices’ Special Investigations Unit along with the Virginia State Police,  Alcohol Beverage Control, and the Alcohol Tobacco and Firearms (ATF). Investigators of the office of the Sheriff discovered a sophisticated underground Marijuana grow operation. This operation was 10 feet underground in which Investigators had to go down a ladder 10 feet and crawl through a tunnel 10 feet long to reach a 40 foot by 8 foot storage container that had been buried. This container had mutable marijuana plants along with other items to manufacture marijuana. Investigators located multiple firearms which were also seized by the Office of the Sheriff, County of Franklin. Other items seized include a vehicle, 2 four wheelers and a Trackhoe. The Virginia Alcohol Beverage Control seized items consistent with manufacturing untaxed whiskey. 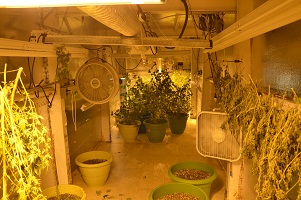