Neighbor: children on overturned bus cared for each other until help arrived

A school bus accident north of Fincastle this morning sent 13 students to the hospital with undetermined–but apparently minor–injuries. It happened about 8:20 a.m. on Zion Hill Road. A nearby resident who happened upon the accident says the students got out on their own and cared for each other until help arrived. WFIR’s Evan Jones has the story.

State Police say 39 students were aboard the bus. Most were heading for Central Academy, a middle school; the rest are James River High School students.  State Police identify the driver as Mary Elizabeth Esque of Eagle Rock. She tells police she was distracted by a student and looked up at the large center rear view mirror just as the bus topped a short hill and reached a curve. Esque is charged with reckless driving and has been placed on administrative leave by Botetourt County Schools. 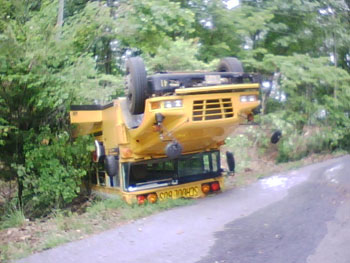