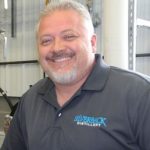 Air Force Veteran, Small Business Owners and National Security Expert Denver Riggleman has announced he is seeking the Republican Nomination to replace Congressman Tom Garrett.  Real estate developer Jim McKelvey has also announced.  Riggleman was a GOP primary candidate for Governor at one point last year. (from a statement) : “I am officially announcing my candidacy for the Republican nomination for the 5th Congressional District. As a political outsider, veteran, small business owner, and grassroots conservative, I will bring a fresh perspective to DC and help pass the President’s agenda. As we have all seen over the past few years, it takes a real outsider with real world experience to drag the swamp monsters to dry land. As a veteran and small business owner, I am perfectly suited for that task.

I would like to thank Rep. Tom Garrett for his many years of public service as a Congressman, State Senator, and Commonwealth’s Attorney. He and I have become close friends ever since I first signed up to be a delegate for him at the 2016 5th District Convention. Christine and I are sending prayers and best wishes to Tom and his family during this difficult time. Tom is a man of courage and a conviction, I look forward to continuing his pristine conservative voting record in DC.”