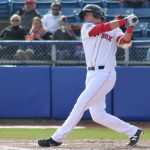 (Salem Sox release) The Salem Red Sox have announced that third baseman Bobby Dalbec was dubbed the Carolina League’s 2018 Most Valuable Player and a Year-End All-Star. Dalbec, 23, is the first Salem player in the Red Sox era (2009-present) to win MVP honors.  He more than backed up those accolades, hitting a Red Sox-era record 26 homers, which was three more than any other Carolina Leaguer.