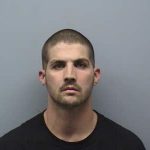 UPDATE: The victim in Monday’s shooting at a West Main Street convenience store in Salem has now been identified as 32-year-old Anthony Joseph Trovata of Shawsville, according to a City of Salem spokesperson.

(Previously reported) A man wanted for a fatal shooting in Salem has been arrested after a stand-off with police in Christiansburg. Authorities apprehended 32-year-old Mark Bell after a stand-off at a Days Inn that began around 1:30 this morning. It ended about two and a half hours later. A woman who was inside the motel room with Bell was also apprehended. Police were looking for Bell after he allegedly shot and killed another man just after 2 AM yesterday at the GoMart on West Main Street, that’s down the road from the Wal-Mart. Authorities say 29-year-old Angela Woolwine was with the victim at the time of the shooting. She’s facing multiple charges and is being held without bond.

Law enforcement arrived at the Days Inn at 1:24 a.m. and evacuated the motel guests into the lobby. Authorities from Montgomery County, Christiansburg, Blacksburg, Virginia State Police, Salem and Roanoke County were on scene.

Law enforcement made contact with Bell and a female inside the room, and both surrendered without incident at 4:09 a.m. Immediately after, the evacuation was lifted and motel guests were able to return to their rooms.

Mark Allen Bell, 32, of Roanoke, and Lauren June Leffler, 27, of Bedford, are in custody with the Montgomery County Sheriff’s Office.

From Salem Police Department: Salem Police are asking that anyone having information concerning the whereabouts of Mark Allen Bell to contact them immediately. The 32-year-old Roanoke man is suspected of shooting and killing another male early this morning on West Main Street in Salem.

At approximately 2:04 a.m., Salem Police Officers responded to the 1900 block of West Main Street in reference to shots fired. Upon arrival at the Go Mart convenience store, officers located a male subject in the parking lot suffering from a single gunshot wound. He was transported to Carilion Roanoke Memorial Hospital where he later died, as a result of the shooting.

Bell is charged with Second Degree Murder, Possession of Firearm by a Convicted Felon, Use of a Firearm in Commission of a Felony, Reckless Handling of a Firearm and Discharge a Firearm within the City Limits.

After further investigation, a female who was with the victim at the time of the shooting, Angela Woolwine, 29, of Roanoke, was charged with Possession of a Controlled Substance with Intent to Distribute. She is being held at the Roanoke County-Salem Jail on a secured bond.

Anyone with information on Mark Allen Bell’s whereabouts can contact the Salem Police Department at 540-375-3010.