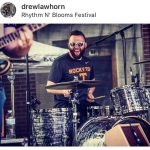 FloydFest 19 meant another return home for Salem native Drew Lawhorn, who left the area to further his career as a drummer in Nashville about a decade ago. He was with Nora Jane Struthers and her band The Party Line this past weekend. It was the first FloydFest for Lawhorn with Struthers, although he’s played the festival previously with his good friend and Roanoke singer-songwriter Jordan Harman. Nora Jane Struthers and The Party Line are back at 5 Points Music Sanctuary in Roanoke on August 15.