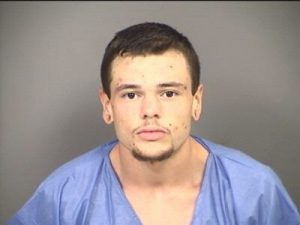 NEWS RELEASE: This morning, Wednesday, July 29, 2020, at 4:58 a.m. the Botetourt County Sheriff’s Office received an emergency call from a resident in the 4000 block of Mountain Pass Road in Botetourt County.  The resident advised that a subject had overdosed with an unknown substance and was unresponsive.

A subject at the scene administered NARCAN to the unresponsive subject. The subject became responsive and was able to gain control of a vehicle and flee the residence.

Botetourt County Deputies responding to the scene located the vehicle driving erratically traveling north on Mountain Pass Road, heading toward Route 11. Deputies activated their emergency equipment and attempted to stop the vehicle. The vehicle refused to stop and headed north on Route 11 at a high rate of speed.

The pursuit continued onto Route 43 and into Bedford County where deputies attempted to use Stop Sticks to disable the suspect vehicle which was unsuccessful. The vehicle was finally stopped on Route 460 in Botetourt County after a second deployment of Stop Sticks.  As deputies approached the vehicle the driver was visible, but would not respond to commands.  Deputies gained access to the driver, who was unresponsive, and called EMS.  The driver was transported to Roanoke Memorial Hospital for treatment.

Cody Joseph Brads, 23, of Salem, Va. was charged with Felony Elude of Police, Driving under the influence of Drugs, and Obstruction of Justice. Brads is currently being held without bond at the Botetourt-Craig Regional Jail.