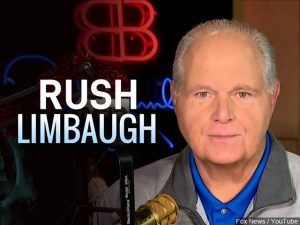 Conservative radio host Rush Limbaugh says his stage four lung cancer is terminal. Limbaugh says his doctors changed his medications in “hopes of keeping additional progression at bay for as long as possible.” Limbaugh says quote “it’s tough to realize that the days where I do not think I’m under a death sentence are over.”