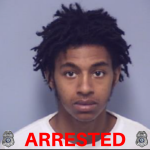 UPDATE 10/1): The victim of this incident has been identified as Basil Hubble, 31 of Roanoke.

(from Roanoke PD) On September 29 at approximately 9:00 p.m., a Roanoke Police Officer was patrolling in the area of 6th Street/Moorman Avenue NW. Roanoke Police analysts have identified this area as one that has shown a recent increase of violent crime. Roanoke Police direct targeted enforcement to these areas when possible in an attempt to interrupt acts of violence or organized crime.

As the Officer passed one of the convenience stores on Moorman Avenue, he noticed a subject enter the store. The Officer parked his vehicle across the street from the store. Within seconds, he heard the sound of gunshots coming from inside the business and observed a subject exiting the store and attempting to flee on foot. Officers were able to apprehend the suspect and take him into custody. Officers located a firearm and an undisclosed amount of currency in the suspect’s possession.

Officers discovered that an adult male victim inside the store had been struck by gunfire. Roanoke Fire-EMS pronounced the man deceased on scene. His identity will be released after next-of-kin is properly notified. The suspect is identified as Jamerius Crennell, 20 of Roanoke, and is charged with second-degree murder. This remains an ongoing homicide investigation.