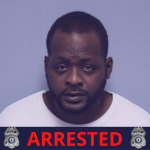 On August 9 at approximately 9:15 a.m., the City of Roanoke E-911 Center notified Roanoke Police of a possible bank robbery that had occurred in the 2800 block of Brambleton Avenue SW (Hometrust Bank). Responding Officers determined the suspect was no longer on scene, and immediately set up a perimeter in the area to look for the suspect. Evidence indicated the male suspect entered the business, displayed a weapon, physically assaulted an employee of the business, then took an undisclosed amount of U.S. Currency and fled the scene on foot. All available personnel continued searching for the suspect. After following numerous leads, they were ultimately able to locate the suspect, identified as Brian N. Brown, 39 of Roanoke. Brown was taken into custody without incident and charged with robbery.