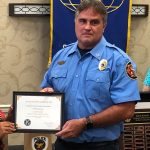 A Grandin Village resident says he intends to run for Roanoke City Council this November as a Republican candidate, assuming he is nominated. Dalton Baugess says the gun violence in Roanoke is a principal reason he wants to run for one of the three seats that are up for election this year.  He says paying police officers more will help retain them – and would bring down the violent crime rate with more cops on the street. He would also like to see an elected school board in Roanoke City – there’s more accountability to the public that way he says. Baugess works for the Salem Fire & EMS Department.