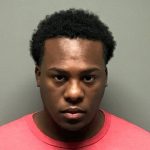 NEWS RELEASE: Salem Police have made an arrest related to a shooting incident that took place earlier this summer. On June 29, at approximately 2:30 a.m., officers from the Salem Police Department responded to the 1700 block of Ellis Court after receiving a 911 call saying gunshots had been heard in the area. Upon arrival, officers found several empty cartridge casings in the roadway and they discovered that three of the discharged rounds had struck two occupied homes and one parked vehicle on the street. No injuries were reported that morning. As a result of the investigation, Khari H. Brice, 20, of Roanoke, has been arrested and charged with two counts of Shooting into an Occupied Dwelling, three counts of Damaging Property, Reckless Handling of a Firearm, Discharging a Firearm in City Limits and Shooting a Firearm from a Vehicle. Brice is currently being held without bond at the Roanoke County/Salem jail. Salem Police believe these circumstances are related to another disturbance in this same area that took place in late July. Both incidents remain under investigation.