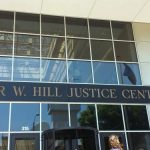 On what would have been his 112th birthday – also “Rule of Law Day” – the Roanoke City Courthouse was formally rededicated today as the “Oliver W. Hill Justice Center.” Hill was an African-American civil rights lawyer who spent part of his youth and early days as an attorney in Roanoke. Oliver Hill was involved with the landmark Brown versus Board of Education Supreme Court case. He finished second in his class at Howard University law school behind future Supreme Court Justice Thurgood Marshall.  Roanoke Mayor Sherman Lea presided at today’s renaming ceremony: