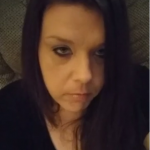 2 suspects have been apprehended in that southwest Roanoke County weekend murder where the fatally shot victim was dropped off barely alive at the Lewis-Gale Cave Spring ER. But police are still looking for the third suspect – Shamby Marie Walker (see photo) is described as 5 foot 10 inches tall, weighing about 280 pounds, with brown hair and brown eyes. She’s charged with being a “Principal in the Second to the Second Degree Murder” among other things. Roanoke County detective Mark Tuck asked for the public’s help today.