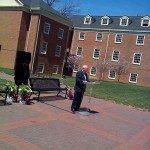 Roanoke College has dedicated a student dormitory in honor of Bob and his wife Mary Wortmann….Bob Wortmann is the former chair of the school’s Board of Trustees and helped lead a campaign to bring at least 75 percent of the students back to living quarters on campus. President Michael Maxey unveiled a plaque outside the Robert E. and Mary J. Wortmann Complex earlier today…a renovated space that turned three smaller buildings into one larger dorm. 4 new residential buildings with almost 700 beds were also constructed at the Salem-based school while alum Bob Wortmann was the Board chairman from 2003 to 2011. WFIR’s Gene Marrano spoke with President Maxey: