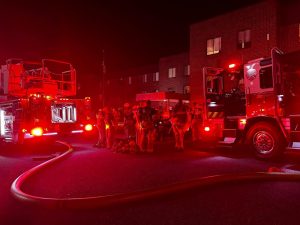 (Update 4pm) Last night at 11:46 p.m., Roanoke Fire-EMS was dispatched to the 3700 block of Stratford Park Drive for reports of a structure fire. First arriving units found flames and smoke showing from an apartment building and upgraded the call to a two-alarm response, to which Fire-EMS personnel responded with a full complement within 8 minutes of dispatch. Due to the size of the building and the life safety issues related to the largely senior and disabled population who reside at the location, the call was upgraded to general alarm, resulting in all available Fire-EMS units being dispatched to the scene. Early in the response effort, three individuals in cardiac arrest were rescued from the building; two were resuscitated and transported to area hospitals, and the third was pronounced dead on scene.

Numerous rescues and extractions were performed in addition to the first three. Two patients were transported to local hospitals with non-life threatening injuries related to smoke inhalation, and numerous others were treated and released on scene. No injuries to Fire-EMS staff have been reported. Approximately 100 people and multiple pets have been displaced as a result of the fire. These
individuals are being assisted by the American Red Cross. The Fire Marshal’s Office has determined the fire was accidental, and began as a result of improperly discarded smoking materials. The damages to the building and its contents is estimated to be $1,650,000.

From Roanoke City Fire EMS Department: Shortly before midnight, Roanoke Fire-EMS was dispatched to reports of a structure fire on the 3700 block of Stratford Park Dr. Upon arrival, units found flames showing from an apartment building. Multiple residents were rescued from the building. Five residents were transported to local hospitals. Unfortunately, one fatality has been reported. Crews are still on scene and the fire is under investigation. More information will be released at a later time.