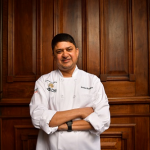 A Roanoke chef made it to the final round at the “World Food Championships” in New Orleans. We won’t know if Peter Radjou won the $100,000 grand prize until the televised final table airs on CNBC in August. Radjou is owner and chef at Taaza in Grandin Village.

World Food Championships news release: NEW ORLEANS, La.,  After two days of intense cooking challenges, local chef Peter Radjou from Roanoke, Virginia, made it to the final round at the World Food Championships’ (WFC) Final Table Challenge in New Orleans. Food fans can see if Peter takes home the $100,000 grand prize at the Creole-themed competition in a special one-hour television program on CNBC this August.

To earn his spot to compete for the World Food Champion title and cash prize, Peter was crowned Bacon World Champion at WFC’s Main Event last November. He then took on nine other category champions in a private event held on May 18-19 at the New Orleans Culinary and Hospitality Institute, known locally as NOCHI.

The Creole-inspired competition kicked off with a special Eggs Benedict Challenge featuring NestFresh Eggs. The finalists whipped up their best NOLA-inspired version of this classic dish. The panel of esteemed judges included MasterChef star Katie Dixon, Two-time Pasta Champion Suzanne Clark, Chef Ryan Rondeno, Chef JD Eubanks and Sysco’s Corporate Chef Raymond Yakelis. Once the judges’ scores were in, the field was cut in half with only five champs, including Peter, advancing to the next round.

For Challenge Two, Peter and the four remaining finalists headed to Dickie Brennan’s Tableau to taste the dish they would be tasked to recreate – Redfish Bienville. On top of the already intimidating challenge, Dickie Brennan himself, along with Tableau’s Chef Gus Martin, served on the judging panel for this round.

Before announcing the three chefs who would advance to the next and final round, Brennan shared his thoughts on how the group of cooks handled this difficult challenge.

“I thought you all knocked it out of the park,” Brennan said. “The only tough part was picking the winner!”

Peter’s second-place finish in the second challenge qualified him into the final round at WFC’s Final Table Challenge.

Peter described his overall experience in New Orleans competing for the coveted food crown as a wonderful experience.

For their third and final challenge, Peter and the other two remaining cooks who emerged from the previous round, traveled to Antoine’s –America’s oldest family-run restaurant. There, they met CEO Rick Blount and Executive Chef Rich Lee, who challenged the finalists with creating an appetizer worthy of their menu —  which hasn’t changed in 100 years. Both Blount and Lee joined the judges’ panel later that evening to determine the winner (all of which was filmed in a private setting for the upcoming TV show).

To all of the food-fighting action, drama and if Peter was named the ultimate winner, mark your calendars for August 24th —  that’s when “The Final Table: New Orleans” will air on CNBC.