Riggleman: Maybe Congress can now get around to more legislating 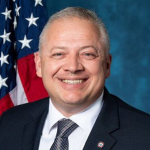 5th District Congressman Denver Riggleman is praising the manner in which Attorney General William Barr managed the release of Special Counsel Mueller’s report. Barr held a news conference this morning before making the report public. Riggleman says many Democrats would have been critical of the way that was handled no matter what Barr did or did not do — and he was critical of  much of the national media’s response:

Democratic leaders in Congress say Barr should have released the report to them and to the public before holding today’s news conference.

Riggleman says he hopes Congress might now turn its attention away from all things Trump and more toward legislating:

He says while it will likely remain difficult to pass any major legislation, he is more hopeful that more targeted bills might see action on matters that include addressing opioid addiction and increasing rural broadband access.