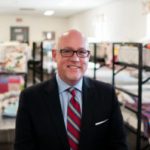 Next month Roanoke City could pass an ordinance that would make it a class 4 misdemeanor to sleep on a sidewalk in the downtown district. That could mean more homeless people will have to seek a shelter instead. Rescue Mission of Roanoke CEO Lee Clark says they are ready. Clark says the Rescue Mission and other shelters in the valley noticed an uptick in the number of homeless this past summer; he calls it “a tough time,” with the pandemic just making matters worse.