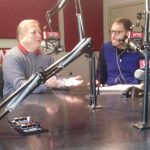 Debates on casino gambling, guns and the ERA may grab the spotlight but meat-and-potatoes issues like the biennial budget will also have their time in the spotlight as the General Assembly session gets under. Republican delegate Chris Head was live in studio this morning; he said the General Assembly needs to be fiscally prudent despite the encouraging numbers on jobs and wages at this time.  Head said live in-studio this morning he recalls a special session that was needed during Democratic governor Terry McAuliffe’s administration when the budget had to be tweaked when tax revenues fell short of projections. Hear the complete two-part conversation with delegate Chris Head below:

Part 2 of our interview with Chris Head below was recorded off-air: