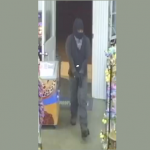 Roanoke City Police are seeking a suspect or suspects for two armed robberies over the weekend – the first Friday night on the 600 block of Liberty Road Northeast, the second Sunday night on the 600 block of Moorman Avenue Northwest. Police say in both cases, a man who walked in, pulled out a handgun and demanded money. The stores are not named, but only retail businesses on those blocks are the Snappy Mart on Liberty and A and A Market on Moorman.

From Roanoke City Police: On May 11, 2019 just before 8:00pm, Roanoke Police responded to a robbery call at a business in the 600 block of Liberty Rd NE. Investigation shows that an unidentified male entered the business where he subsequently displayed a small handgun and demanded money. After obtaining an undetermined amount of money the subject fled the area on foot toward the Williamson Rd area.

On May 12, 2019 just before 10:00pm, Roanoke Police responded to a robbery report at a business in the 600 block of Moorman Ave NW (pictured in photo at left). Investigation shows that a male entered the business with his face covered displaying a firearm and demanded money. After obtaining an undisclosed amount of money, the subject fled the area on foot. This is an ongoing investigation.

These are ongoing investigations. Anyone with information about these incidents is asked to call (540)344-8500 and share what you know. You can also text us at 274637; please begin the text with “RoanokePD” to ensure it’s properly sent. Both calls and texts can remain anonymous.