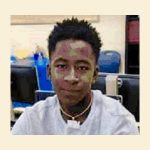 NEWS RELEASE: On October 1, 2019 at around 1:30 pm, the 17-year-old suspect [Ozmeik Clements] involved in this incident came to the Roanoke Police Department and turned himself in to police. He was taken into custody without incident. All outstanding warrants were served. This is an ongoing investigation. There is nothing else we can share with the public at this time.

PREVIOUS: Roanoke Police have identified the victim of last week’s fatal shooting at 13th and Campbell Southwest. They confirmed what family and friends had already said: he was 17-year-old Savion Scales. Meantime, police are still looking for a suspect in the case. Ozmeik Clements, who is also 17, faces a first-degree murder charge.

PREVIOUS: Roanoke Police have arrested a teenage suspect for a shooting death this week, and they are seeking a second. Police say 18-year-old Cinque Fayette of Roanoke is charged with the murder of a juvenile Wednesday night near 13th and Campbell Southwest. Officers are asking for help finding 17-year-old Ozmeik Clements. He faces a first-degree murder charge.

UPDATE FROM ROANOKE POLICE: Regarding this incident, on September 12th Roanoke Police arrested Cinque Fayette, 18 of Roanoke. Fayette is charged with 2nd degree murder. Roanoke Police are also seeking the community’s assistance locating a second individual. Ozmeik Clements, 17 of Roanoke, is wanted on charges of 1st degree murder and use of a firearm in the commission of murder. Clements (pictured attached) is described as a black male, approximately 5 ft tall and weighs 110 lbs. Anyone with information about Clements whereabouts or this incident is asked to call (540)344-8500 and share what you know. You can also text us at 274637; please begin the text with “RoanokePD” to ensure it’s properly sent. Both calls and texts can remain anonymous.

PREVIOUS:On September 11, 2019 just before 10:00 pm, Roanoke Police responded to a report of a person shot at the intersection of 13th Street SW and Campbell Avenue SW. Upon arrival, officers located a juvenile male who had been shot. Roanoke Fire-EMS pronounced the male deceased on scene. Roanoke Police are currently on scene investigating. No arrests have been made regarding this incident. Anyone with information about this incident is asked to call (540)344-8500 and share what you know. You can also text us at 274637; please begin the text with “RoanokePD” to ensure it’s properly sent. Both calls and texts can remain anonymous.