Suspect now in custody after shooting at Roanoke County 7-Eleven 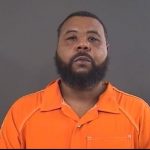 (new update) On July 30 Roanoke County Police took Mario Deshaun Reynolds, 37, of Roanoke into custody for the July 28 shooting at the 7-Eleven located at 5002 Plantation Rd.  Reynolds was charged with     aggravated Malicious Wounding and use of a Firearm in the Commission of a Felony. Reynolds is currently being held without bond.  Roanoke County Police continue to pursue leads in this investigation and encourage anyone with information to contact Roanoke County at (540) 562-3265.
(previous UPDATE FROM ROANOKE COUNTY POLICE: At approximately 9:00 p.m. Tuesday, Roanoke County Police received several 911 calls regarding gunshots being fired in the 5000 block of Plantation Rd. Callers advised of hearing numerous shots being fired in the parking lot area of the 7-11 located at the intersection of Plantation Rd and Hershberger Rd. Upon arrival, police were able to identify one gunshot victim that had been driven from the scene to Roanoke County Fire Station #1 on Hershberger Rd. The victim was subsequently transported by rescue personnel to a local hospital with serious injuries. Initial reports indicated that there was a second gunshot victim, however, police were unable to locate a second victim. Witnesses described observing a light colored two-door vehicle occupied by a black male pull into the 7-11 and begin shooting in the victim’s direction, near the gas pumps. The suspect vehicle fled the scene prior to the arrival of police. Anyone with information is encouraged to call Roanoke County Police at (540) 562-3265.

PREVIOUS : Police are at the scene of a shooting in the parking lot of 7-Eleven at Plantation Road. It occurred around 9:00 PM. The suspect or suspects fled before police arrived. The investigation is underway. 2 injuries – 1 minor/not transported and 1 with potential life threatening injuries/transported to hospital.