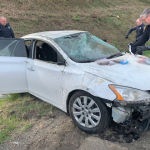 From Virginia State Police: At 9:30 a.m. this morning units with the Counter-Terrorism Criminal Interdiction Unit of the Virginia State Police attempted to stop a white, 4-door, 2014 Toyota which was traveling south on Interstate 81 at the 158 mile marker. The vehicle was identified as being stolen from the State of New York. When troopers activated their emergency equipment the vehicle fled a high rate of speed, driving in a reckless manner; in an attempt to get away from the troopers.

The vehicle continued south on Interstate 81, then crashed at the 149 mile marker. The vehicle ran off the left side of the roadway, crossing the median into the north bound lanes and came to rest on the right shoulder of the roadway. No other vehicles were involved in the crash.

The car was stolen from a restaurant the evening of April 3, 2019 from the State of New York.

The event remains under investigation.