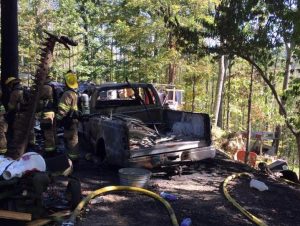 NEWS RELEASE: Roanoke County Fire and Rescue responded at about 10:30 a.m., on Tuesday, October 15, 2019 to the 7800 block of Bending Oak Drive, which is located in the Catawba/Masons Cove area, for the report of a vehicle fire that was 20 feet from a house. First arriving crews from Catawba found heavy fire and smoke showing from a pick-up truck and a single-story house on fire as well. The fire was brought under control in about an hour. There were no injuries. The home was occupied by a single adult male who was able to escape. Units from Catawba, Masons Cove, Hollins, Cave Spring, Fort Lewis and the City of Salem responded to the fire.

The structure fire is determined to be accidental, due to an accidental vehicle fire too close to the residence. One male and a dog are displaced but staying with family in the area. The estimated damages are $50,000.00.