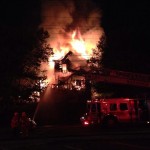 On Wednesday, September 10, 2014, Roanoke Fire-EMS responded to a structure fire in the 400 block of Marshall Ave.  The call was received in the E-911 Center at approximately 1:56am and was under control at 3:00am. When crews arrived the two story house was fully engulfed in flames. The house was vacant and no one was injured. Investigators dug through the debris today and ruled that the fire was intentionally set.  Anyone with information is asked to call Crime Line at 540-344-8500 or the Roanoke Fire Marshal’s Office at 540-853-2795.

Fire officials say they got the call just before 2 a.m. Wednesday. Crews responded to the 400-block of Marshall Avenue in southwest Roanoke. Firefighters found a two-story house on the corner of Marshall and 5th Street engulfed. After finding no one inside the abandoned structure, they began a heavy exterior attack, while letting the fire partially burn out on its own. It took a while to put out the fire and firefighters stayed on scene for hours to watch for hotspots. A witness tells WFIR that the flames appeared to be three stories high and thick smoke could be seen for blocks. Streets in the area had to be blocked off while crews worked the fire. There are no reports of injuries and Roanoke Fire-EMS has not yet reported the cause of the fire or damage estimates.