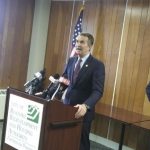 Governor Ralph Northam chose the Roanoke Redevelopment and Housing Authority for his local stop on a statewide tour today, to promote the fact that as of July 1st for more than 600,000 Virginians their driver’s licenses will no longer be suspended for unpaid court costs. Northam said the former suspension policy disproportionately hurt those on the lower end of the income scale. 26,000 Virginians impacted by the new policy applied to have their driver’s licenses restored yesterday.