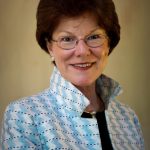 Hollins University has announced that President Emerita Nancy Oliver Gray has been named the school’s interim president for the 2019-20 academic year, beginning August 12. Gray, who was president of Hollins from 2005 to 2017, will serve in that capacity while the University conducts the search for a new president to succeed Pareena Lawrence, who resigned as president effective June 30.

“We are extremely grateful to be able to benefit from Nancy’s leadership and institutional knowledge during this time of transition,” said Alexandra Trower, chair of the Hollins Board of Trustees and a member of the class of 1986. “She left an indelible mark on our campus as Hollins’ 11th president.” Among her many achievements, Trower noted that Gray “facilitated innovations in our undergraduate and graduate programs, oversaw major campus renovations and improvements, masterfully managed the University’s budget, and spearheaded the largest fundraising campaign in Hollins’ history and doubled the size of the endowment.”

Since her retirement two years ago, Gray has been a senior consultant at Gonser Gerber, where she helps colleges, universities, secondary schools, and other non-profit organizations nationally with institutional leadership and advancement. She will continue this work while assuming her new role at Hollins. “When the Board of Trustees approached me to serve as interim president, I knew I had a responsibility to return to this special place and community during this time of presidential transition,” Gray stated. “I will do all I can to help Hollins move forward as the search for the 13th president of Hollins is conducted