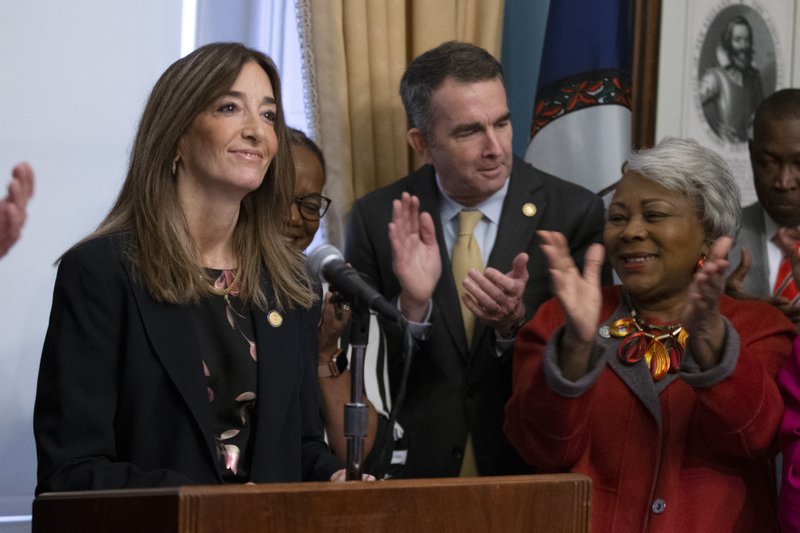 RICHMOND, Va. (AP) — A historically diverse Virginia General Assembly convened Wednesday, led for the first time in more than two decades by Democrats who promised to enact a litany of changes.

The House quickly elected Eileen Filler-Corn at the new speaker, the first woman to serve in that role. She is also the first Jewish speaker.

“A new torch is being passed today, one that ushers in a modern era representing all Virginians,” Filler-Corn said on the House floor.

Many Democratic lawmakers wore blue Wednesday, a nod to the November blue wave that helped them take full control of the General Assembly for the first time in a generation. Democrats have made strong gains in Virginia since President Donald Trump was elected in 2016, significantly changing the makeup of the General Assembly. Women, people of color and millennials have all made gains.

African American lawmakers are set to have most power at the legislature in Virginia’s 400-year history, including leading several powerful legislative committees.

“It is our time,” Sen. Jennifer McClellan, vice chairwoman of the Virginia Legislative Black Caucus, said Wednesday morning. She said the black caucus was committed to eliminate the “last vestiges of racism and white supremacy in Virginia law.”

In the weeks since Democrats won majorities in the state House and Senate, they have laid out an ambitious agenda. It includes high-profile issues Republicans thwarted for years, including gun control measures and criminal justice reforms. They also have pledged to ease restrictions on abortion access, raise the minimum wage, prohibit discrimination against members of the LGBTQ community and make Virginia the next state to ratify the Equal Rights Amendment.

Lawmakers also will be tasked with passing a two-year state budget and deciding whether to legalize casinos.

Gun issues figure to be the most high profile area of debate. Some of the new restrictions Gov. Ralph Northam and Democratic lawmakers want include universal background checks, banning assault weapons and passing a red flag law to allow the temporary removal of guns from someone who is deemed to be dangerous to themselves or others.

Republicans and gun-rights groups have pledged stiff resistance. Gun owners are descending on local government offices to demand that officials establish sanctuaries for gun rights. More than 100 counties, cities and towns have declared themselves Second Amendment sanctuaries and vowed to oppose any new “unconstitutional restrictions” on guns.

Democrats indicated early Wednesday that they were not going to pass a set of rules organizing how the House will operate, as is traditional on its first day. The delay allows Democrats to put off a contentious floor debate on whether to ban guns from the Capitol, which likely would have overshadowed much of Wednesday’s events.

The Equal Rights Amendment was expected to be another top issue. Democrats say their caucus unanimously supports ratifying the gender equality measure and have pledged to do so quickly.

Hundreds of advocates for what could become the next amendment to the U.S. Constitution staged a lively rally outside an entrance to the Capitol, where they cheered as Democratic lawmakers walked in and chanted “E-R-A” as several Republicans followed.

Opponents held a press conference Wednesday morning where they warned ratification would lead to the rollback of abortion restrictions as well as a host of negative consequences for women. Critics of the measure say the ERA is not lawfully before the states for ratification, in part because of a congressional deadline that passed decades ago.

ERA advocates’ efforts in Virginia “will be nothing more than political commentary. The time to ratify the ERA expired more than 40 years ago,” said Kristen Waggoner, senior vice president of the U.S. Legal Division and Communications for Alliance Defending Freedom.

Later Wednesday night, Northam, who has largely rebounded from a blackface scandal that almost drove him from office a year ago, is set to address lawmakers.

Wednesday also marks the return of Joe Morrissey, a former Virginia lawmaker who used to spend his days at the General Assembly and his nights in jail after being accused of having sex with his teenage secretary. Morrissey defeated a Democratic incumbent in a primary to win a Richmond-area senate seat.

Republicans have cast Democrats’ agenda as extreme, saying it would bring Virginia in line with liberal California or New York. They’ve promised to look for ways to hold the majority accountable, keep Virginia business friendly and exercise fiscal restraint.

“We think that very quickly, the voters of Virginia will begin to get buyer’s remorse about what they’ve done here,” incoming House Minority Leader Del. Todd Gilbert said.