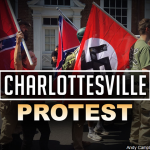 CAMP LEJEUNE, N.C. (AP) — A U.S. Marine identified as a member of a white supremacist group involved in violence during last summer’s white nationalist rally in Charlottesville, Virginia, is out of the military after being convicted at a court-martial.

Pistolis did not return a telephone message Sunday seeking comment. Marine Corps spokesmen with not respond to emailed messages on Saturday.